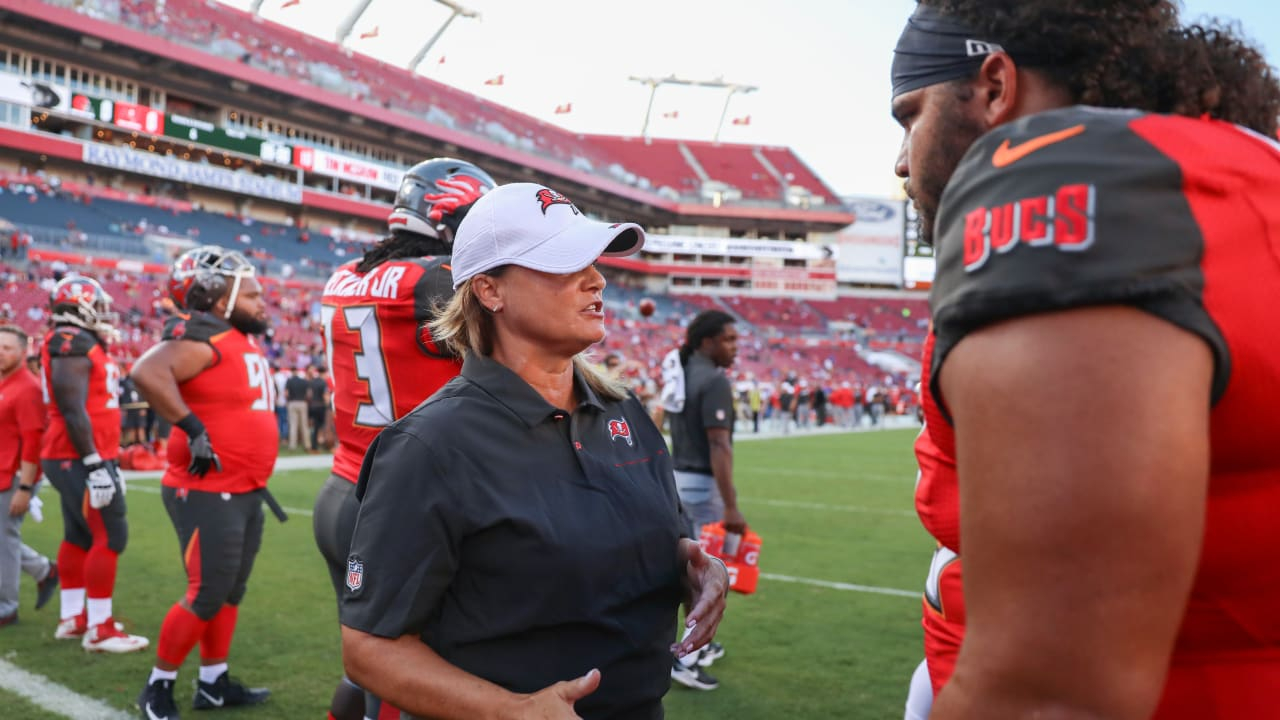 "Honored and blessed to have been named the ‘Coach Lo Locust Tropical Bowl Coach of the game. Not only did we have a productive week of Dline work while debuting skills in front of NFL scouts, I got to represent Dartmouth Football in the most authentic way by winning the game! ..Thank you for letting me WORK, until next time Tropical Bowl" 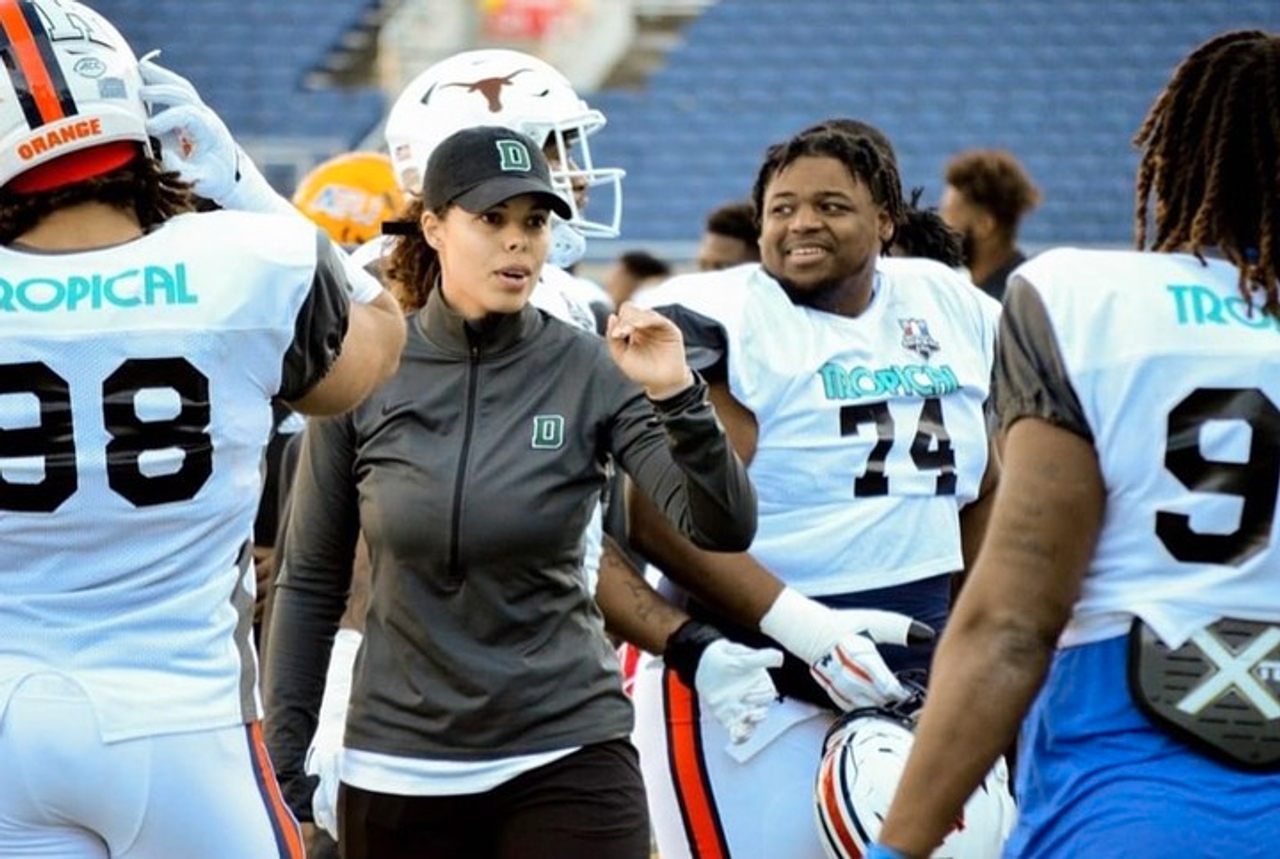 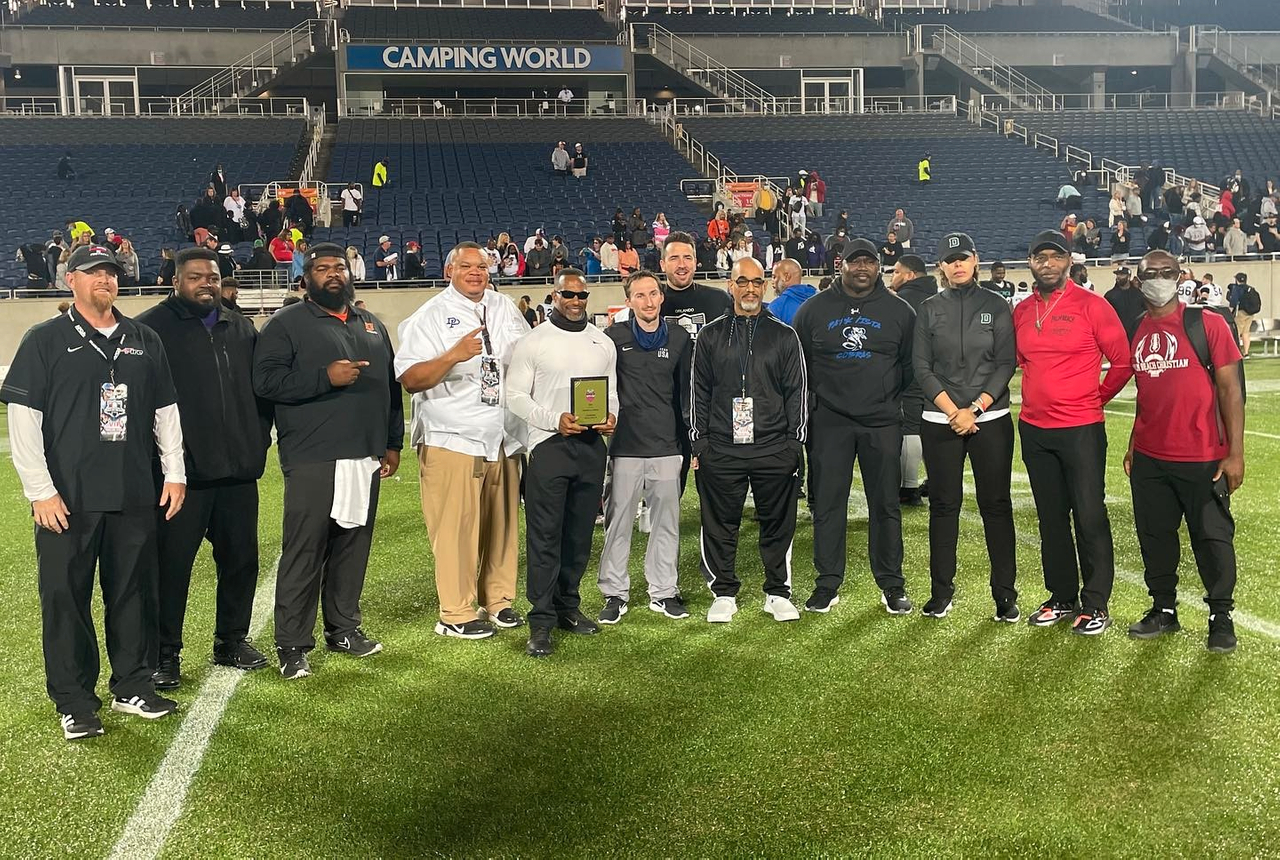 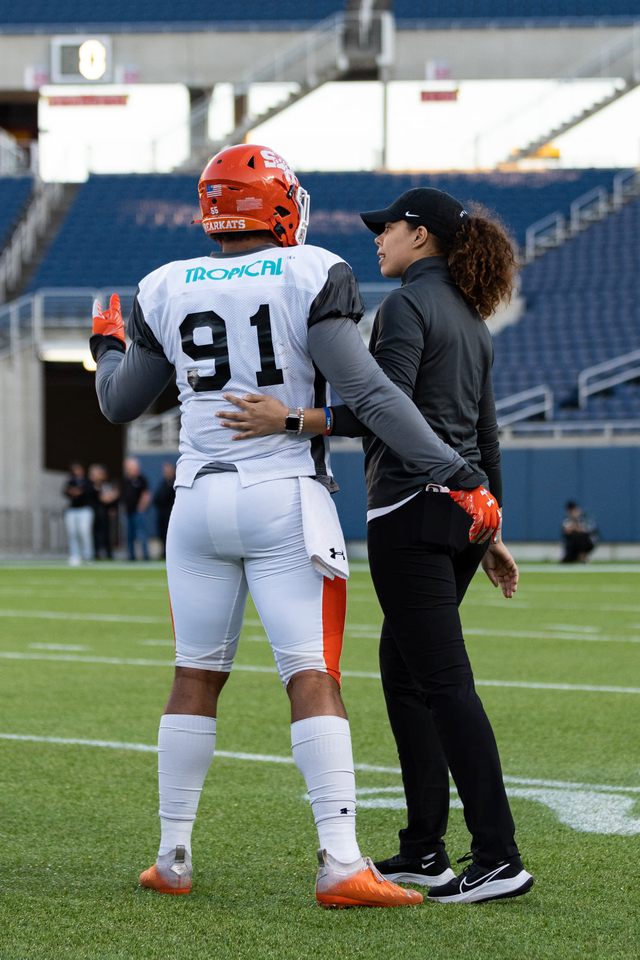 Mickey Grace joined the Dartmouth football staff in the summer of 2021, joining a growing group of female personnel that have been a part of the program. She will serve as the defensive assistant, the same capacity in which Jennifer King served during the 2019 season. King became the first Black female assistant coach in NFL history with the Washington Football Team in 2020.

Most recently, Grace served as a scouting apprentice with the Los Angeles Rams while continuing her role as a math teacher and defensive line coach at Mastery Charter North High School in Philadelphia, Pennsylvania, where she worked since 2016. She has also supported the Tampa Bay Buccaneers as a training camp intern.

A 2014 graduate of West Chester University, Grace played rugby while earning her bachelor's degree in psychology. She played football throughout her days as a student at the now-shuttered Germantown High in Philadelphia as well.

ABOUT THE TROPICAL BOWL AWARD:

The Tropical Bowl Committee and founder Michael Quartey Esq. of East Preps would like to formally announce the creation of the “SPIRAL Tropical Bowl's Lori Locust Women's Coaching Internship Award” with the intention to spotlight talented women coaches within the football community and create dynamic opportunities for women globally in the sport to advance to the pro level. The Tropical Bowl founder Michael Quartey Esq.  and Head Coach Jim Collins worked closely with Lori “Lo: Locust for years during her record setting rise to success breaking down barriers to become one of the first female NFL Coaches (2019 Tampa Bay Buccaneers). During the Tropical Bowl internship the award winner will work directly with pro level football coaches learning and executing advanced football techniques during live action at the Tropical Bowl college all-star game with NFL personnel, scouts, & GM's present from virtually every NFL team. Throughout the year East Preps & Tropical Bowl also has partnered with the Women's Football Alliance (WFA) with the help of Coach Lori Locust, Lisa King, and Wyn Dominy  in it's international Team America- Team United "Globe Games" events  to help spread the sport of american football to women globally.

As this award Women's Internship was established in her honor, NFL Coach Lori Locust humbly states, “The creation of this internship is a culmination of extraordinary people with vision continuing to seek out qualified talent both in athletes and their coaching staffs, regardless of gender. I was a humbled recipient being given a chance to prove myself with East Preps and consider the experience to be a very important and vital step in my coaching journey. To be able to work now with them to help support the career pipeline for qualified female coaches is incredible. "

Coach Chenell “Soho” Tillman-Brooks has more than 20 years of experience in football both as a players and a championship coach. One of her many accomplishments includes being named an intern in 2018 at Dartmouth College under Coach Buddy Teevens and was the subject of a football documentary called “Playing with Rage.” She is a native of Chesapeake, Virginia and a United States Army Veteran. The Tropical Bowl is excited to work with Chenell during the Tropical Bowl and honor her accomplishments within the sport.

"My Tropical Bowl experience was the highlight of my season as a coach. It’s one thing to teach players the game of football, it’s another to watch up close the end result of their hard work in front of NFL Scouts and agents. Having the opportunity to work with top level coaches to gauge and improve my game knowledge alongside college athletes isn’t something that comes along often for female coaches.  East Preps and their staff have possibly opened an internship path for a long list of deserving and qualified female coaches to which I am grateful to have been the first recipient!" - CHENELL “SOHO” TILLMAN-BROOKS 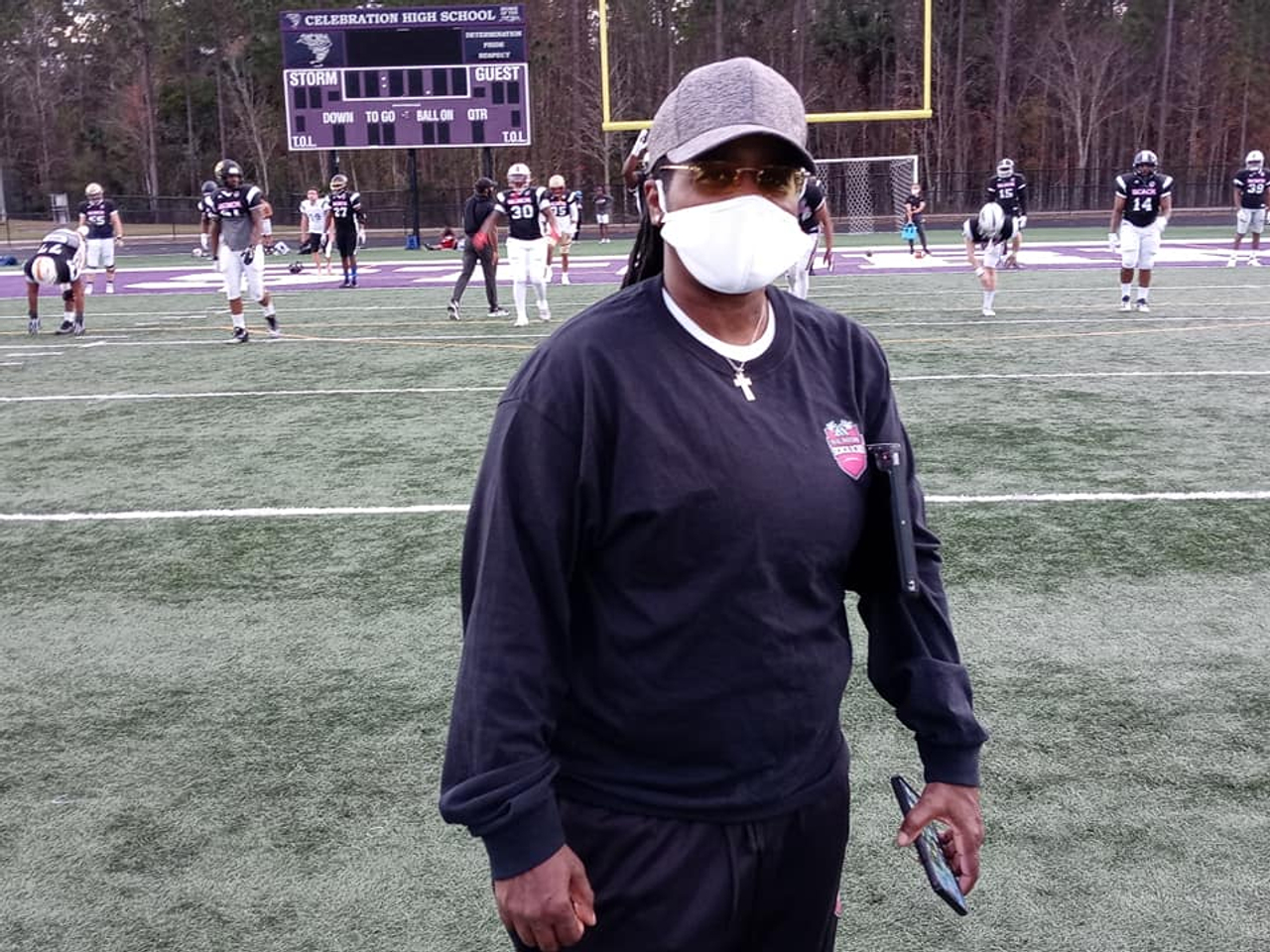 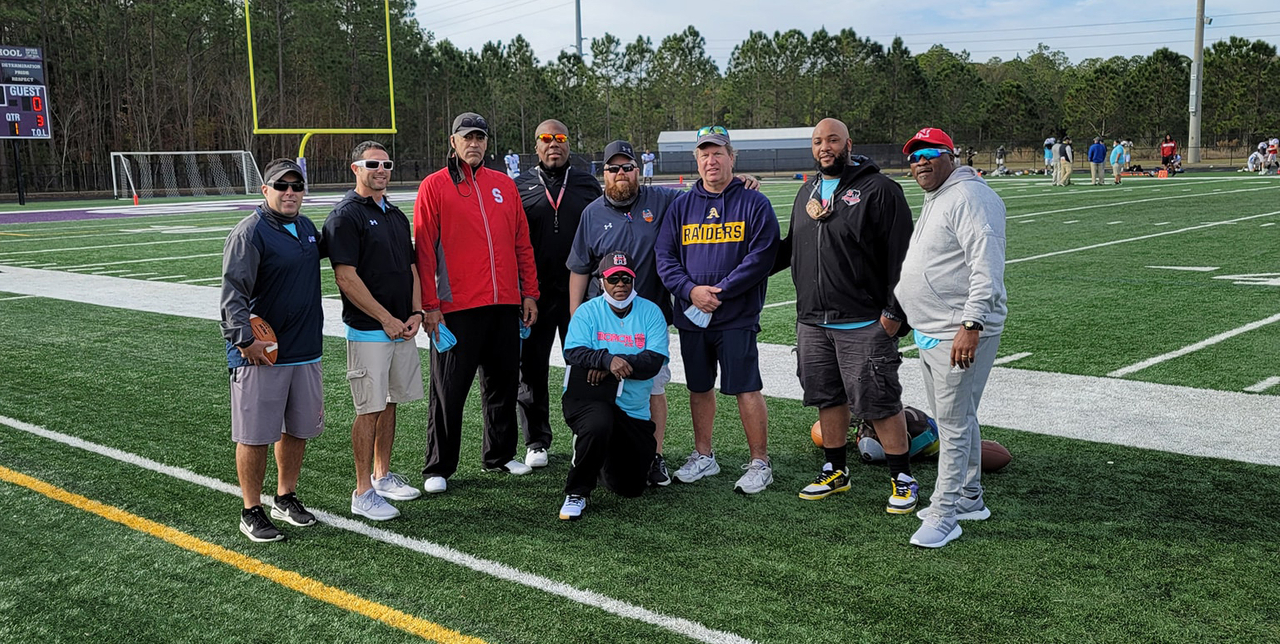 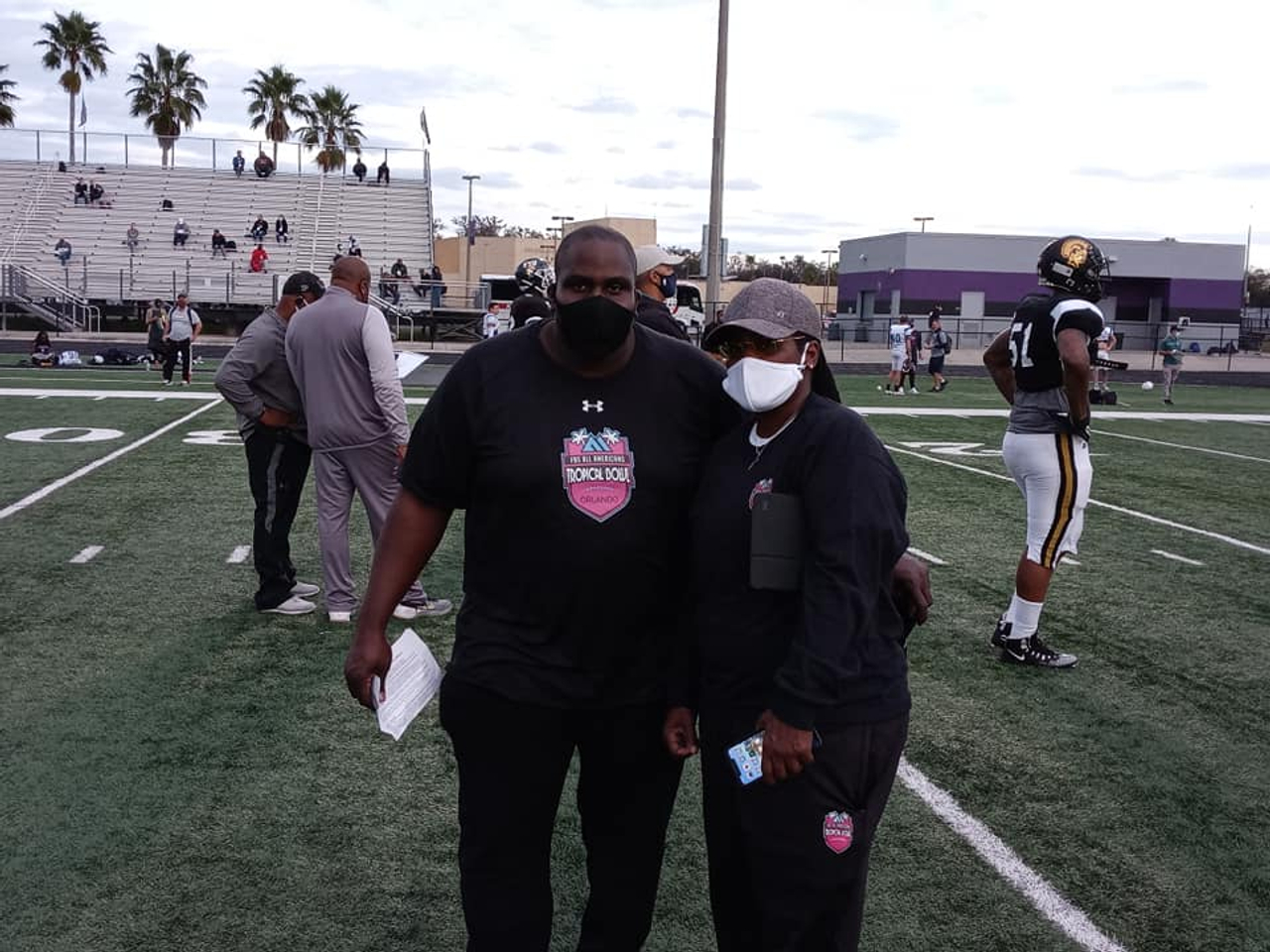